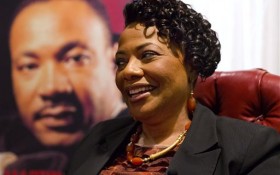 It’s the 30th anniversary of the Martin Luther King Jr. federal holiday Monday, and all across America people are remembering the civil rights giant in their own way.

At Ebenezer Baptist Church, the King Center in Atlanta is set to celebrate the day with a commemorative service.

The service caps more than a week of events meant to celebrate the slain civil rights icon’s legacy. The overarching theme of this year’s celebration is “Remember! Celebrate! Act! King’s Legacy of Freedom for Our World.”

The theme of freedom is especially meaningful this year, she said, because it is the 50th anniversary of her father going to Chicago to highlight the need for open and fair housing. King and the Southern Christian Leadership Conference in January 1966 announced plans for the Chicago Freedom Movement.

In a nod to that legacy, Secretary of Housing and Urban Development Julian Castro is set to speak at Monday’s service.

Also set to bring greetings at the service is Ambassador Jeffrey DeLaurentis, charge d’affaires to the U.S. embassy in Havana, Cuba.

The Rev. William Barber II, president of the NAACP in North Carolina, is set to deliver the keynote address.

Among the highlights of the events leading up to the commemorative service was a two-part discussion on Jan. 9 — part one was The Race Factor and part two was Rights vs. Responsibilities — that was part of the King Center’s series “The Beloved Community Talks,” which focuses on King’s philosophy of nonviolence. Part of that philosophy involves having truthful, candid, intense, uncomfortable conversations without anyone feeling demoralized, Bernice King said.

“Conflict is inevitable. Differences are inevitable. We will never get to a place where we will all agree on everything,” she said. “We have to have a manner of dealing with each other where we respect the dignity and worth of the person.”

The annual Salute to Greatness Awards Gala, the King Center’s primary fundraiser, was held Saturday. It is meant to honor individuals and corporations that demonstrate a commitment to social responsibility. This year’s individual honoree was Howard Buffett, chairman and CEO of the Howard G. Buffett Foundation, and the corporate honoree was TIAA-CREF, a financial services company.