Marines ready to take down ISIS in Iraq - The Horn News 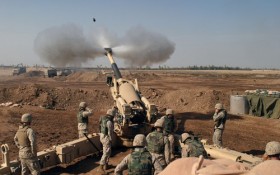 The U.S. Department of Defense says a U.S. Marine was killed Saturday by enemy fire in northern Iraq after, according to reports, the United States military has begun staging a “couple hundred” Marines from the 26th Marine Expeditionary Unit in the area.

According to CNN, these Marines have begun constructing a base of operations in the area, and appear to be gearing up to bring the fight directly to the ISIS at the terror group’s biggest prize, the city of Mosul.

Officials say in a press release Sunday that Staff Sgt. Louis F. Cardin, of Temecula, California died Mar. 19th from wounds suffered when his unit was hit by ISIS rocket fire. According to another official, the Marines moved in near the frontline with ISIS two weeks ago, in an area controlled by Kurdish forces.

Their movements may have been spotted by ISIS militants, who launched the rocket attack in response.

A U.S. official said Saturday that the attack occurred at the Makhmour base outside the Islamic State group-held city of Mosul, where Iraqi anti-ISIS forces have been — for months — massing for a largely anticipated offensive.

The presence of so many Marines in the region has experts speculating that United States ground troops may take a much larger role in the offensive, and could be tasked with leading the attack. That means Cardin’s fellow Marines may soon get a chance for revenge against ISIS.