Marines make headway in Afghanistan under Trump - The Horn News 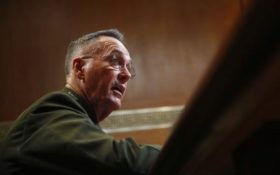 In Afghanistan’s turbulent Helmand province, U.S. Marines are rekindling old relationships and identifying weaknesses in the Afghan forces that the Trump administration hopes to address with a new strategy and the targeted infusion of several thousand American forces.

Returning to Afghanistan’s south after five years, Marine Brig. Gen. Roger Turner already knows where he could use some additional U.S. troops. And while he agrees that the fight against the Taliban in Helmand is at a difficult stalemate, he said he is seeing improvements in the local forces as his Marines settle into their roles advising the Afghan National Army’s 215th Corps.

Turner’s report on the fight in Helmand will be part of a broader assessment that Gen. Joseph Dunford wlll collect this week from his senior military commanders in Afghanistan.

Dunford landed in Kabul Monday with a mission to pull together the final elements of a military strategy that will include sending nearly 4,000 more U.S. troops into the country. He will be meeting with Afghan officials as well as U.S. and coalition military leaders and troops.

The expected deployment of more Americans will be specifically molded to bolster the Afghan forces in critical areas so they can eventually take greater control over the security of their own nation.

The Taliban have slowly resurged, following the decision to end the combat role of U.S. and international forces at the end of 2014. The NATO coalition switched to a support and advisory role, while the U.S. has also focused on counterterrorism missions.

Recognizing the continued Taliban threat and the growing Islamic State presence in the county, the Obama administration slowed its plan to withdraw all U.S. forces from Afghanistan by the end of last year. There are now about 8,400 there.

But commanders have complained that the sharp drawdown hurt their ability to adequately train and advise the Afghans while also increasing the counterterror fight. As a result, the Trump administration is completing a new military, diplomatic and economic strategy for the war, and is poised to send the additional U.S. troops, likely bolstered by some added international forces.

Defense Secretary Jim Mattis will be in Brussels later this week and is expected to talk with allies about their ongoing support for the war.

While Turner said he has already seen improvements in the Afghan’s 215th Corps, he said adding more advisers would allow him to pinpoint problems at the lower command levels, including more brigades.

“The level and number of advisers you have really gives you the ability to view the chain on all the functional areas. The more areas you can see — you can have a greater impact on the overall capability of the force,” he told the Associated Press in an interview from Helmand Province. “If we had more capacity in the force we would be able to address more problems, faster.”

He said that although the Afghan forces have improved their ability to fight, they still need help at some of the key underpinnings of a combat force, such as getting spare parts to troops with broken equipment.

The seemingly simple task of efficiently ordering and receiving parts — something American forces do routinely — requires a working supply chain from the warehouse to the unit on the battlefield.

And Turner said that’s an issue that could be improved with additional advisers.

Other improvements, he said, include increasing the size of Afghanistan’s special operations forces and building the capacity and capabilities of its nascent air force.

The Afghan ground forces in Helmand, he said, have been able to launch offensive operations against the Taliban, including a recent battle in Marjah.

“I don’t think last year they could have taken the fight to Marjah like they just did,” he said. “They’re in a much better position that they were a year ago.”

But they are facing a resilient Taliban, whose fighters are newly financed, now that the poppy harvest is over.

“Once they draw their finances, they start operations,” said Turner. “What we’ve seen so far since the end of May, when they made that transition, is a steady grind of activity across a number of places in the province.”

Why are doctors keeping quiet about pain-free living? [sponsored]

What has helped a lot, Turner said, is his Marines’ ability to renew old relationships with Afghan tribal elders, provincial ministers and military commanders they worked with six or seven years ago.

Battalion officers they knew then are now commanders; many government leaders are still in place.

“We obviously have a long commitment here in Helmand. It’s been good for the Marines to come back here,” he said. “This is a really meaningful mission. I think people realize that we don’t want to get into a situation where the kinds of pre-9/11 conditions exist again.”