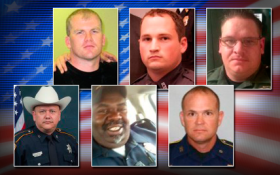 The manhunt continues in and around the village of Fox Lake, Ill. for the suspects in the fatal shooting of Lt. Charles Joseph Gliniewicz, a sheriff’s office spokesman said. Hundreds of police have poured into the normally sleepy town to help in the search for the cop killers.

During this tragedy, some citizens and police are standing up and demanding America not forget that “Police Lives Matter”, too.

Around Fox Lake, residents expressed their own sorrow over the death of the immensely popular Gliniewicz.

Thirty-year-old Dan Raminick held a sign that said “Police Lives Matter.” He lives a couple miles away and said officers came by Tuesday evening and thanked the crowd.

Caitlyn Kelly, a 22-year-old student, said she felt compelled to come out after other recent police shootings. She held a sign that said “Blue and Brave.”

The day before, Tuesday, Shannon J. Miles was officially charged with fatally shooting a suburban Houston sheriff’s deputy in an attack the sheriff said was possibly fueled by rising tensions linked to the Black Lives Matter movement.

Deputy Darren Goforth, 47, a Harris County deputy for 10 years, was filling his patrol car Friday evening at a gas station in Cypress, a suburb northwest of Houston, when he was gunned down.

Miles allegedly walked up to the deputy from behind and shot him 15 times, including in the head and back after he had fallen from the initial shots.

“There’s no doubt in my mind that Deputy Goforth was murdered because of the color he wore, because he was blue, because he was an officer,” Joe Gamaldi, a vice president of the Houston Police Officers’ Union, said Monday.

A study for the International Association of Chiefs of Police showed that from 1990 to 2012 1,219 law enforcement officers have been slain.