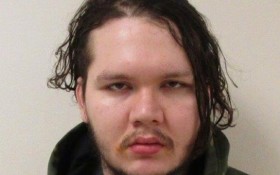 Here’s the latest on authorities desperate search to find a mentally unstable accused killer that is loose in Washington:

Anthony Garver, who escaped from a Washington state psychiatric hospital Wednesday night, was last seen near Spokane at his parents house Thursday, which he fled when his mother called 911, local station Q13 Fox reported.

He was one of two men who escaped from a troubled psychiatric facility in Washington state. One escapee was caught Thursday, but the second fugitive, who was accused of murder but found mentally incompetent to stand trial, is still on the loose.

According Snohomish County Assistant Prosecutor Craig Matheson, Garver was charged in 2013 with tying a 20-year-old woman to her bed with electrical cords, stabbing her 24 times in the chest and slashing her throat, Fox News is reporting.

Lawler says Adams, who was arrested on suspicion of domestic assault in 2014, was recognized and police detained him. Detectives will interview him.

Adams got on a bus Wednesday night after he and Anthony Garver, 28, fled Western State Hospital, south of Tacoma, police said. Adams asked how to get to the airport, and he was caught in a town just south of Seattle-Tacoma International Airport.

The escape is the latest in a litany of problems at the 800-bed hospital, south of Tacoma.

U.S. regulators have repeatedly cited the facility over safety concerns for both staff and patients, including violent assaults, leading to threats to cut millions in federal funds to the facility. The Centers for Medicare and Medicaid Services recently extended the hospital’s deadline for fixing the problems from April 1 to May 3.

A federal judge also has said the hospital has failed to provide timely competency services to mentally ill people charged with crimes.

Garver, who was arrested on suspicion of murder in 2013, remains at large. Both men were being treated for mental illnesses by court order when they escaped on foot. They had been found mentally incompetent to stand trial.

Garver’s real last name is Burke, but he goes by Garver and also has used the alias Deryk Garver, Lawler said. Police are urging anyone who spots Garver to keep away and contact authorities.