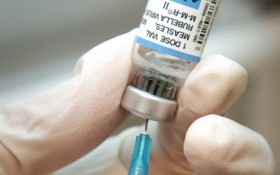 Opponents of an effort to repeal California’s new stricter law requiring mandatory vaccines for school children failed to submit enough signatures to qualify for a ballot initiative asking voters to repeal the law, according to some reports.

County election clerks reported receiving fewer than 234,000 of the 366,000 signatures needed to ask California voters to repeal the law, according to figures provided to the secretary of state’s office and posted online Thursday. The new state law struck down the state’s personal belief exemption for immunizations, a move that requires nearly all public schoolchildren to be vaccinated.

Six counties reported they received the petitions after the Sept. 28 deadline for submission.

Gov. Jerry Brown signed the vaccine measure into law earlier this year amid fierce opposition from some parents’ rights groups who argued the state should not force their children to be vaccinated.

The leading proponent of the repeal effort, former Republican Assemblyman Tim Donnelly, previously signaled in an email to supporters that the initiative was unlikely to qualify. A note on the group’s Facebook page also said many covers were torn off the front of booklets used to collect signatures, invalidating them.

The bill’s author, Sen. Richard Pan, D-Sacramento, has said he believed the vast majority of Californians supported the law.

Supporters of the effort to repeal SB277 raised more than $170,000 on an online fundraising site to hire paid signature gatherers, falling far short of their $750,000 goal.

California will join Mississippi and West Virginia as the only states with such strict requirements if the law takes effect as planned next year.