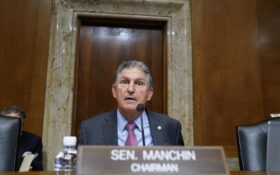 The Democrats have been hemorrhaging membership since their better-than-expected performance in the midterm elections.

In one high-profile example, Sen. Kyrsten Sinema of Arizona de-registered from the party earlier this month. Now, the Senate Democrats are becoming wary of losing another key member: Joe Manchin of West Virginia.

On Sunday, Manchin stirred speculation about switching parties with one cryptic remark.

CBS anchor Margaret Brennan asked Manchin, “Do you see an advantage in this environment to becoming unaffiliated?”

“I’ll let you know later what I decide to do, but right now I have no intentions of changing anything except working for West Virginians, trying to give them more opportunities, a better quality of life, and basically making sure our country is energy-secure. That means national security,” he said.

Brennan pried into Manchin’s cryptic remark about party-switching. “That’s a little bit like warning the Democrat leaders that you’re considering something in the future,” she said.

“They know how independent I am,” Manchin said of the Senate’s Democrat leaders.

“The D does not saddle me to everything the Democrats want to do is what’s right. I don’t think the Democrats have all the answers. I don’t think the Republicans are always wrong. And vice versa. I don’t look at things that way. Where I come from is basically, ‘How do I survive and make a better quality of life that we can extend to more people?’ That’s it.”

Manchin concluded, “If the Republicans have a good idea and I like it, I’m with it. If I’m the only Democrat, which I’ve been many times, I feel very comfortable that I can come home and explain it.”

"Do you see an advantage in this environment to becoming unaffiliated, to becoming an independent?" @margbrennan asks Democratic Sen. Joe Manchin.

"I'll let you know later what I decide to do, but right now I have no intentions of changing anything," Manchin says. pic.twitter.com/smbJCuTpl1

Manchin made the remark after an embarrassing defeat in the 50-50 Senate. During the Senate vote on the National Defense Authorization Act, the senator tried to include an amendment to reform permitting for energy drilling. He watched the amendment fail 47-53, with only seven of the 50 Republicans voting in favor.

The West Virginia Democrat slammed the Senate Republicans for voting against his amendment. He accused them of prolonging the wait for new permits in order to make the governing party look bad.

“If people are trying to stop something from doing so much good because of the politics, thinking that somebody else might get credit for it — let’s see how that plays out,” Manchin said when asked about party-switching. “They keep saying, ‘We’ll get a better deal when the House goes Republican. I say to my Republican friends and colleagues, ‘You’ve had the entire gambit from 2017… when you had the president being Republican, the House and the Senate. You had one Democrat, me.'”

“That’s an unfair charge against Ale Mayorkas,” Manchin said, discussing some Republicans’ calls to impeach Mayorkas. “I think the gentleman is very competent. He can do a good job. They just need to unleash him and let him do his job. That’s what I’ve said before, and I’ll say it again.”

On the other hand, Manchin also slammed the Senate Democrats for overreaching on energy policy.

“You can walk and chew gum,” Manchin said. “Provide more fossil energy cleaner. Provide more investments in the cleaner technologies. That’s what’s coming, and that’s what we have to embrace.”

Manchin has also slammed Sinema for delaying negotiations on the stalled Build Back Better Act. Manchin described her as “a senator from Arizona who basically didn’t let us go as far as we needed to go with our negotiations and made us wait two years.”

Still, Manchin has begun speaking more and more like an independent. Earlier this year, the senator flatly denied any rumors about switching parties. On Sunday, he simply punted the question.

Following the vote on permitting reform, Manchin had said in a statement, “I serve West Virginians and the American people with an independent voice, not a political party. What is clearer now than ever is that party politics are paralyzing our nation’s ability to unite around the solutions our country needs.”

He continued on Sunday, “I don’t put much validity in the identity of being a Republican or Democrat. I think we’re all Americans. I grew up in an age when, if you’re a Republican or Democrat, we all acknowledged we had a problem. We all had different ideas about how to solve the problem, but we were all trying to solve the same problem. It has basically transitioned itself to now, to where, “How can we blame somebody else? How can we create a problem and blame somebody else for it that makes them unpopular.” That’s not what I signed up for… I speak out. I speak out against the Democrat Party and the Republican Party, when it’s wrong.”