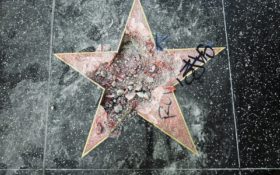 A man who admitted to taking a pickax to President Donald Trump’s star on the Hollywood Walk of Fame was just charged with a felony — and could be facing as many as three years in prison.

Austin Clay was charged by the Los Angeles District Attorney after allegedly destroying the star last month — and he was caught on video during the whole incident.

The liberal activist said he does not regret the vandalism even though he could be facing a years in prison.

Watch footage of the destruction here —

In an interview sent to TMZ, Clay admitted that he destroyed the star over his stance on immigration.

“I just felt really passionate because of what happened with the immigrants and him [Trump] stripping children away from their parents,” Clay said after being released on bail. “And that just sort of set me off.”

“I think Donald Trump represents everything that everybody with half a brain and half a heart in this country resents,” he added.

This coming from a man that took a pickax to a sidewalk because he’s mad at someone?

Most people would consider a person that destroys property for no reason to be a someone without half a brain.

Clay even admitted to interviewers that he “didn’t resent doing it.”

Meanwhile, convicted rapist Bill Cospy’s Hollywood star is undisturbed. I guess that’s because liberals celebrities such as Robert DiNero and Chelsea Handler have come to his rescue.

“Robert De Niro left me a voice message,” Clay shared. “He wanted to say…he wanted to give me a high-five. Chelsea Handler [wanted to know if I was single].”

“I think I did, like, a real good act,” he added. “Personally, I don’t feel resentful. I feel proud of myself.”

Wonder if he’ll feel as proud in prison?