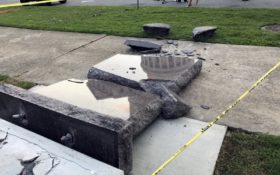 A judge has ordered the release of a man who destroyed Arkansas’ Ten Commandments display weeks after he was acquitted on mental health grounds.

Pulaski County Circuit Judge Vann Smith approved the conditional release Friday of Michael Tate Reed from the state hospital to live with his mother in Alma, Arkansas. Smith said that Reed must receive treatment from the Valley Behavioral Health System, and is prohibited from driving a vehicle.

Sponsored: I couldn’t believe what was living inside my body…

A judge in late May acquitted Reed of destroying the monument outside Arkansas’ Capitol with his car in 2017, after an evaluation said Reed lacked the capacity to follow the law at the time.

Reed destroyed a similar monument in Oklahoma City in 2014, but Oklahoma prosecutors didn’t charge him after concerns were raised about his mental health.