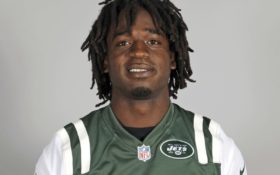 The man convicted of manslaughter in the 2016 road rage shooting death of former NFL running back Joe McKnight was sentenced to 30 years in prison Thursday.

Ronald Gasser, 56, had faced up to 40 years in prison. Defense lawyers argued that Gasser fired in self-defense when McKnight walked up to his car following a 5-mile confrontation that began on a bridge spanning the Mississippi River in New Orleans and ended with gunfire in neighboring Jefferson Parish.

McKnight’s mother testified Thursday during the sentencing hearing. Jennifer McKnight left the courtroom sobbing after angrily telling Gasser: “You didn’t have to do that.”

Witnesses at the trial said McKnight had been weaving in and out of traffic at high speed before the shooting. Prosecutors acknowledged to the jury that he was, in the words of Assistant District Attorney Seth Shute, “driving like a jerk.” But they argued that Gasser escalated the conflict, following him down an exit that he would not ordinarily have taken moments before the shooting.

Shute acknowledged that McKnight had a hand on the open, passenger side window of Gasser’s car before he was shot. But he said physical evidence proved Gasser lied during extensive police questioning when he claimed McKnight lunged at him.

McKnight had been a high school football hero at Louisiana’s John Curtis Christian School. He signed with the University of Southern California in 2006. In the NFL, he played three seasons for the New York Jets and one with the Kansas City Chiefs.

Gasser was indicted on a second-degree murder charge. The jury voted 10-2 for the lesser verdict of manslaughter.

Gasser did not leave the scene of the shooting and he was released for a time after being questioned. He is white and his release after the shooting of the black athlete sparked protests from some who said race was a factor.

Jefferson Parish Sheriff Newell Normand, who has since retired, denied that race played any role and noted that a thorough investigation led to Gasser’s arrest and indictment. Prosecutors later recounted a painstaking investigation, including an extensive search for witnesses and physical evidence that eventually led to Gasser being charged.

The case in some ways echoed another New Orleans-area road rage shooting from 2016. Former New Orleans Saints star Will Smith was gunned down in that April incident. The shooter was later convicted of manslaughter and sentenced to 25 years.