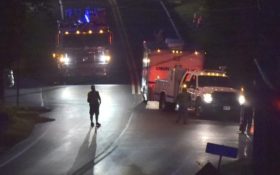 A gunman authorities say shot at his ex-wife and then killed his parents in Pennsylvania has been found dead.

Chester County District Attorney Tom Hogan said during a media briefing early Thursday that 59-year-old Bruce Rogal was dead after a manhunt and a police chase.

Few other details are available.

Hogan had said Wednesday that Rogal, of Glenmoore, received an order finalizing a divorce that awarded their home to his ex-wife and “that appears to be what set him off.”

Hogan says Rogal first went to the house where his ex-wife was staying, shot at her and missed.

He then drove to a retirement center in East Goshen Township and killed his parents, William and Nancy, both in their late 80s, and then fled.