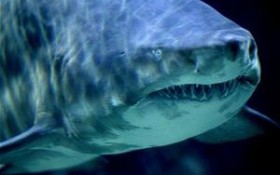 “I just got attacked by a tiger shark,” an exasperated Braxton Rocha, 27, of Kapaau, Hawaii, said in the shaky video posted to Instagram. The footage pans down the man’s body to a gaping gash in the middle of his left leg, the YouTube video of which we share below. Warning – even blurred, the content is graphic.

Rocha, a Hawaii spear fisherman, was bit in the leg by a tiger shark off the coast of the Big Island. He swam to shore and then filmed a video of his deep wound as he was being carried away on a gurney.

“Love you, brah,” a friend standing near him says. “Love you too, brah,” Rocha replies before the clip ends.

A tiger shark believed to be 13 feet long bit Rocha’s leg Sunday as he spearfished off the northern tip of the Big Island, officials said. He swam to shore after the attack, and his fishing companion called 911, the state Department of Land and Natural Resources said in a press release.

Rocha was flown by helicopter to a hospital for surgery. His condition was not immediately known.

State officials said they did not close beaches because the attack happened in a remote area off Upolu Point. It had rained heavily, and they warned people not to go into the ocean afterward because murky water can attract sharks.

The attack marked the fourth shark injury in Hawaii in 2015, all of which occurred in turbid waters. Only one of those encounters was fatal. A woman died from her injuries off the coast of Maui in April when an unknown species of shark bit her while snorkeling.

The Hawaii Department of Land and Natural Resources says tiger sharks are most often behind serious injuries and deaths in Hawaii. They are considered among the three most dangerous sharks in the world along with bull and white sharks. However, great whites are very rare in Hawaiian waters and bull sharks do not visit the state at all.

There were six shark encounters in Hawaii in 2014, none them fatal.

You can watch the video below. WARNING, the content may be disturbing to some –