Man arrested for throwing a LIVE gator into fast-food joint! - The Horn News 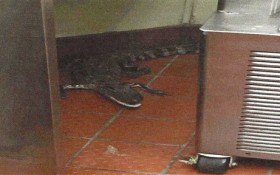 Joshua James, 24, was arrested Monday and charged with assault with a deadly weapon without intent to kill after Florida Fish and Wildlife Conservation officials say he threw a 3.5-foot alligator through a Palm Beach County Wendy’s drive-thru window in October. He’s also charged with illegally possessing an alligator and petty theft. Bail was set Tuesday at $6,000, and he was ordered to have no contact with animals.

Wildlife officer Nicholas Guerin said in his report that James drove his pickup truck to the window at about 1:20 a.m. Oct. 11. After an employee handed James his drink, he threw the alligator through the window and drove off. No one was hurt. Guerin captured the alligator and released it into the wild. Guerin said James was tracked down through video surveillance and a purchase at a neighboring convenience store.

Guerin wrote that James admitted throwing the alligator in a December interview. He said James told him he had found the alligator on the side of the road and put it in his truck.

“He does stuff like this because he thinks it’s funny,” she said. She said he meant no harm and had “no problem turning himself in.” Phone numbers listed for the James family were disconnected Tuesday.

James P. Ross, a professor emeritus at the University of Florida’s Department of Wildlife Ecology and Conservation, said a 3.5-foot alligator would likely weigh about 20 to 30 pounds, and its hard body could deliver quite a jolt if it struck someone.

He said the gator’s bite would be comparable to a dog’s and would be unlikely to cause serious injury or snap off a finger, although it could tear tendons. Perhaps the biggest concern would be infection if a bite went untreated, he said.

“The alligator would be unlikely to ‘attack’ people and more likely to be in a highly traumatized and frightened defensive mode,” he said. “It could, and quite likely would, snap and lunge at anyone approaching it closely and could project its head and jaws 12 to 18 inches in most any direction.”