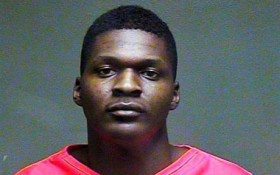 A man was arrested in the shooting and decapitation of his grandmother and her husband at an Oklahoma City home where they operated a day care, police said Wednesday.

Quinton Dashawn Laster, 20, was arrested Tuesday after police found the bodies of Sharon Reed, 59, and James Earl Reed, 78, in the Oklahoma City home where the three lived, according to Sgt. Ashley Peters.

Peters said the couple operated an in-home day care at the property. The children were found unharmed in an attached garage and apparently didn’t see the crime, Peters said. She did not know the ages of the children.

Peters said investigators were still trying to determine a motive for the slayings. It’s the third time in the last year and a half that someone has been charged in Oklahoma with a crime related to a beheading.

Laster is being held on two complaints of first-degree murder, Peters said. She did not know whether he had an attorney who could comment on the allegations.

By early Wednesday afternoon the home had been cleared of the crime-scene tape and police vehicles that flooded the street the night before. A notice hanging on the fence beside the garage read, “All weapons prohibited on these premises,” and included symbols of a handgun and knife crossed out in red.

Seven cars lined the driveway and street in front of the home. A man who answered the door declined to comment and would not confirm whether the people inside were family members of the slain homeowners.

Neighbor Hal Hartsock said the Reeds were dear friends and respected members of the community. Hartsock said he didn’t know Laster well, but had no reason to think there was unrest within the family.

“They were the kind of neighbors everyone wants,” Hartsock said in an interview in his living room.

“I’m not sure exactly what words were exchanged with the neighbor, but the neighbor called 911,” Peters said.

Peters said Laster was arrested in February 2015 for misdemeanor assault and battery and was arrested as a juvenile. She did not provide details of those allegations.

“He has a history with us, but it’s not extensive,” Peters said.