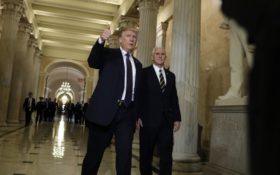 The House has passed a sweeping Republican tax bill cutting taxes for corporations and many people. It puts GOP leaders closer to delivering to President Donald Trump a crucial legislative achievement after nearly a year of failures.

The House voted 227-205 along party lines to approve the bill, which would bring the biggest revamp of the U.S. tax system in three decades.

Before the vote, Trump visited Capitol Hill in an effort to rally Republican support for the bill.

Most of the House bill’s reductions would go to business. Both the Senate and House would slash the 35 percent corporate tax rate to 20 percent and reduce levies on millions of partnerships and certain corporations, including many small businesses.

The Senate Finance Committee is expected to vote on the bill Friday, with the full Senate putting it to a vote after Thanksgiving.