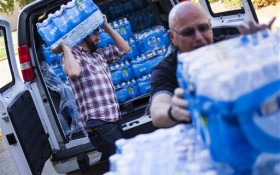 Your water may have been poisoned for months. At least, that’s according to reports out of Michigan. Officials in the state declared a public health emergency Thursday over the city of Flint’s water in response to tests that showed children with elevated levels of lead.

Residents had been complaining for months about their water’s smell and taste.

A day after Gov. Rick Snyder said the consequences of using the Flint River for the city’s drinking water weren’t “fully understood,” Genesee County Commissioners recommended that people not use the water unless it first goes through an approved filter at taps.

A group of doctors called a news conference last week to report high levels of lead in blood samples from children, as the corrosive water is apparently releasing lead from old pipes in homes. It was among the most significant challenges to the quality of Flint water since the city decided last year to stop paying Detroit for its water service.

A coalition of local citizens and national groups petitioned Thursday to order Michigan and state environmental officials to reconnect Flint to Detroit water.

Flint is among a number of communities that have complained about the rising cost of Detroit’s water and sewerage service. City officials estimated the cost of buying water from Detroit at $16 million. They turned off Flint’s tap to Detroit water in April 2014 and opted for Flint River water until the city switches to a new pipeline from Lake Huron. The overall annual cost to be part of the Lake Huron system would be $12.5 million.

But residents have been unhappy with the taste and appearance of water from the Flint River. They also have raised health concerns, reporting rashes, hair loss and other problems. A General Motors plant stopped using the water, saying it was rusting its parts.