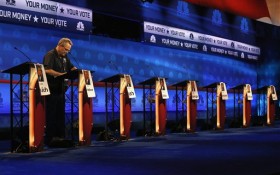 Former Florida governor Jeb Bush’s standing in the 2016 presidential race has never been weaker. When he initially threw his hat in the ring, he was considered by many to be the frontrunner for the nomination.

But with his poll numbers slipping, he has had to slash his campaign staff budget, and a recent release from The Hill has Bush ranked as low as fifth in the GOP field.

Bush needs a win — or at least a big moment — in tonight’s debate. But with the media billing the debate as a showdown between billionaire Donald Trump and Dr. Ben Carson, experts say it could be nearly impossible for Bush to break through. And that could be a death knell for his campaign.

Here are some other things to look for heading into tonight’s debate:

No one is better positioned to benefit from Bush’s struggles than his Florida protege, Marco Rubio. Especially after Wisconsin Gov. Scott Walker quit the race, the 44-year-old first-term senator is considered one of the few candidates who can bridge the GOP’s warring factions by appealing to establishment and hard-line wings. Bush’s team has identified Rubio as its greatest threat. The two may be longtime friends, but expect Bush to go on the attack. Rubio has largely avoided getting dragged into the back-and-forth so far. He may have no option Wednesday night.

Carson, a retired neurosurgeon, may be one of the least known candidates despite his top-of-the-pack polling. After playing bit parts in the first two debates, Carson has become a higher priority for his rivals, particularly those chasing the antiestablishment vote. None has gone after Carson more aggressively than billionaire businessman Donald Trump, who has questioned Carson’s energy, policies and religion. The soft-spoken Carson has refused to counterattack, but expect him to defend himself and explain his positions in the face of mounting pressure. His aides also hope he will tone down the rhetoric; during the campaign he’s made references to Nazis and slavery.

Only in the past week or two has Trump shown signs of vulnerability, but the showman is the ultimate wild card on the debate stage. He has shown a willingness to say or do virtually anything on national television, and heading into the debate, he has jabbed at just about every challenger — none more so than Carson. Based on the ratings in previous debates, people are drawn to the Trump show, but are they growing tired of his act?

New Jersey Gov. Chris Christie was a political powerhouse not long ago. Kentucky Sen. Rand Paul was among the most interesting figures in politics. Texas Sen. Ted Cruz was a champion college debater. Former technology executive Carly Fiorina was an earlier debate winner. Yet all came into Wednesday night’s debate as supporting actors. With 10 candidates on the stage for two hours, there simply won’t be enough time for everyone to stand out — and some of them need to.