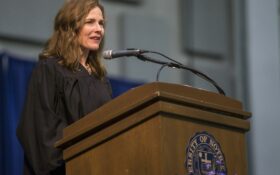 U.S. appeals court judge Amy Coney Barrett is inching closer toward the highest court in the land — but her name is being dragged through the mud in the mainstream media.

Some coverage is fair, but much is downright foul.

While it’s certainly expected that Democrats are going to fight to try and stop the nomination process, critics have taken notice that it’s the media so far that has led the charge against Barrett and questioned her qualifications.

Her religion as a devout Catholic has become a topic of scorn in the mainstream media, too

Just this week, Newsweek ran a story about Barrett’s involvement in the Christian community called People of Praise they were forced to redact. Newsweek wrongly claimed the group was the inspiration for a dystopian totalitarian society in the popular book and T.V. show “The Handmaiden’s Tale“.

The false story was shared thousands of times before it was redacted.

Refinery29, a liberal-leaning website, wrote of Barrett that she’s the “RBG replacement who hates your uterus” — a reference to her views on abortion. Democrats and liberals alike are downright terrified that the addition of Barrett, because of her religion, would guarantee that Roe v. Wade would soon be abolished.

Imagine the uproar if a Republican accused a Supreme Court candidate that’s a practicing Muslim of letting their religion get in the way.

It’s worth mentioning what the mainstream media won’t tell you — as far back as 2017 Barrett said she wouldn’t let her religion influence her court opinions.

Another thing worth mentioning is that Ginsburg herself was an incredibly faithful and practicing Jewish woman.

And Barret just happens to be the same religion as Democratic presidential candidate Joe Biden.

If Democrats say Barrett isn’t qualified for the high court because she’s a devout Catholic, then Biden isn’t fit to be president under that logic.

She hasn’t even been nominated, and already the mainstream media is getting dirty with Barrett.

It’s clear that things will begin to get worse before they get better.