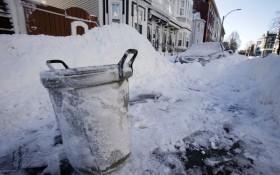 A Maine landlord has admitted killing two tenants in 2012 in a dispute over parking spots after a snowstorm.

Seventy-seven-year-old James Pak had originally planned to use an insanity defense, but he instead pleaded guilty Wednesday in Alfred court to murder.

Police visited the apartment shortly before the December 2012 shooting because 19-year-old tenant Derrick Thompson complained that Pak had been yelling at him and threatening him. An affidavit says the officers deemed the argument a civil matter and left.

Court documents indicate Pak waited for police to leave before fatally shooting Thompson and his girlfriend, 18-year-old Alivia Welch. Thompson’s mother, Susan Johnson, was shot in the back and arm but survived by playing dead.