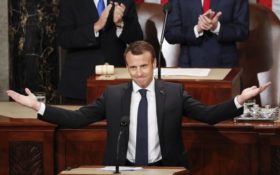 French President Emmanuel Macron drew Wednesday on the “shared bond” of U.S.-French relations to call for a rejection of isolationism and instead for the countries to bond together anew for a 21st century security.

Macron opened a joint meeting of Congress, saying “the American and French people have had a rendezvous with freedom.”

Speaking almost directly to President Donald Trump, Macron quickly turned to the top issues of Syria, free trade and the Paris accord on climate change — issues where he and Trump disagree — as he urged the United States not to retreat from world affairs, but to embrace its historic role as a military leader of world affairs.

“We are living in a time of anger and fear because of these current global threats,” Macron told lawmakers. “You can play with fears and angers for a time, but they do not construct anything.”

With a nod to great American leaders, including former President Franklin Roosevelt, he warned against sowing seeds of fear.

“We have two possible ways ahead. We can choose isolationism, withdrawal and nationalism. It can be tempting to us as a temporary remedy to our fears,” he said. “But closing the door to the world will not stop the evolution of the world.”

In recounting common bonds from the earliest days of the United States, Macron talked about a meeting between Ben Franklin and the French philosopher Voltaire, “kissing each other’s cheeks.”

In an apparent reference to his friendly meetings this week with Trump, he said, “It can remind you of something.”

Macron was speaking as part of his visit to the United States. It’s the first time a president from France has addressed Congress in more than a decade, but follows a tradition of foreign leaders appearing at the U.S. Capitol.