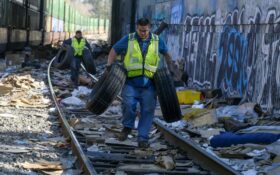 The derailment of six train cars and a subsequent acid leak prompted road closures and evacuations Wednesday in a Louisiana community, officials said.

No injuries were reported in the derailment in the community of Paulina in St. James Parish, about 50 miles (80 kilometers) west of New Orleans. St. James officials said about 200 homes were evacuated. It wasn’t immediately clear what caused the derailment.

Eric Deroche, St. James homeland security director, said a tank car was leaking hydrochloric acid that would have to be neutralized and removed before the evacuation order could be lifted. Inhaling fumes from the corrosive chemical can damage the lungs.

State police spokesman Christian Reed said the damaged rail car was carrying 20,000 gallons (75,700 liters) of the chemical. While officials weren’t sure exactly how much spilled out, St. James Parish President Pete Dufresne told reporters it was likely that all of it had leaked.

Deroche told The Advocate officials expanded the initial evacuation area from 150 homes to 200 homes after the hydrochloric acid vapor spread out as winds calmed down in the area. Officials said residents were being put up in hotels and that they could go to a seniors’ center in nearby Lutcher for a hotel assignment.

Reed said the cleanup would take an “extended period of time,” and asked that residents be patient as the process unfolds.