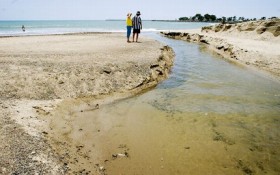 Dillon Sprole never thought he’d see his U.S. Army Corps of Engineers ring again after accidentally leaving it in a gas station bathroom in Orlando about two years ago.

But Larry Hale found the ring in a pile of sand Monday while using his metal detector on Daytona Beach — at least a few dozen miles from the gas station. How it got there is anyone’s guess.

The ring has 21-year-old Sprole’s name engraved on it. So when Hale found it, his wife searched Facebook and found the man.

Sprole tells The Daytona Beach News-Journal that when he lost the ring, he’d had it for only about a month after finishing basic training.

Sprole described the ring for the Hales and plans to pick it up Friday.