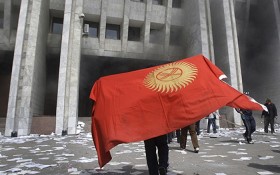 Kyrgyzstan’s Interior Ministry says a British citizen who made rude remarks about the country on social media is to be deported within a day.

The statement Monday on the ministry’s website did not specify what Michael McFeat said, but local media reports say his offending post likened a Kyrgyz sausage called chukchuk to the genitals of a horse.

According to the ministry, McFeat’s comment sparked labor unrest at the Kumitor gold mine, where he is an employee, and in the wake of the scandal he tried to leave the country but was detained at the capital’s international airport.

He was taken to court, charged with insulting the national dignity and then found to be lacking necessary papers for legal residence in Kyrgyzstan, the ministry said.