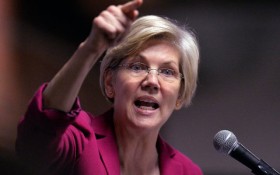 The Democratic Party has been calling for a more civil presidential election — but it looks like nobody relayed that message to Massachusetts Senator Elizabeth Warren.

Warren, a hero to many liberals, has engaged in a war of words with Trump ever since he questioned Warren’s claims that she is a descendant of Native Americans.

While Trump was hardly the first person to raise that issue, he seemed to further stir the pot in a New York Times interview that was published Sunday.

“She’s got about as much Indian blood as I have,” he said.

“Her whole life was based on a fraud,” he added. “She got into Harvard and all that because she said she was a minority.”

That sent Warren into an apparent frenzy Monday, where she tweeted nearly a dozen times in rapid succession.

She called Trump a loser:

Let’s be honest – @realDonaldTrump is a loser. Count all his failed businesses. See how he cheated people w/ scams like Trump U.

A threat to America:

Many of history’s worst authoritarians started out as losers – and @realDonaldTrump is a serious threat.

.@RealDonaldTrump is “cool with being called an authoritarian,” isn’t upset at Hitler comparisons & thinks we won’t fight back? WRONG!

And said Trump’s presidential campaign was racist and sexist:

Why is it that @realDonaldTrump can call himself the “unity” candidate while basing his campaign on racism, sexism, xenophobia & hatred?

Several people chimed in on social media to blast Warren’s attacks on Trump, and to suggest that the language she was using was beneath the dignity of a United States Senator.

During her 2012 election campaign, Warren was criticized after being listed in law school directories as having Native American ancestry.

Trump’s campaign did not immediately provide a response to Warren’s latest remarks.

The exchange comes with Trump leading the race for convention delegates over two surviving competitors and some GOP leaders trying to head off his nomination, saying he would be defeated and cause losses for GOP congressional candidates.

Trump, a prodigious tweeter, has 7 million followers on his account.