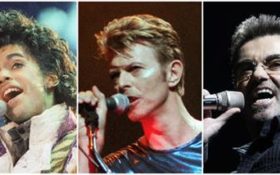 Death claimed transcendent political figures in 2016, including Cuba’s revolutionary leader and Thailand’s longtime king, but also took away royals of a different sort: kings of pop music, from Prince and David Bowie to George Michael.

Embracing harsh, Soviet-style communism, Fidel Castro, who died in November, overcame imprisonment and exile to become dictator of Cuba and defy the power of the United States at every turn during his half-century rule. Perhaps befitting the controversial leader, his death elicited both tears and cheers across the Western Hemisphere.

However, shock, grief and nostalgia greeted the deaths of several giants of pop music. David Bowie, who broke musical boundaries through his musicianship and striking visuals; Prince, who was considered one of the most inventive and influential musicians of modern times; and George Michael, first a teenybopper heartthrob and then a mature solo artist with videos that played up his considerable appeal.

Among the political figures who died in 2016 was the world’s longest reigning monarch: King Bhumibol Adulyadej, who was revered in Thailand as a demigod, a father figure and an anchor of stability through decades of upheaval.

Here is a roll call of some of the people who died in 2016. (Cause of death cited for younger people, if available.)

Pierre Boulez, 90. Former principal conductor of the New York Philharmonic, one of the leading figures in modern classical music. Jan. 5.

Otis Clay, 73. Hall of fame rhythm and blues artist known as much for his charitable work in Chicago as for his singing. Jan. 8.

David Bowie, 69. Other-worldly musician who broke pop and rock boundaries with his creative musicianship and a genre-spanning persona he christened Ziggy Stardust. Jan. 10.

Glenn Frey, 67. Rock ‘n’ roll rebel who co-founded the Eagles and with Don Henley formed one of history’s most successful songwriting teams with such hits as “Hotel California” and “Life in the Fast Lane.” Jan. 18.

Abe Vigoda, 94. Actor whose leathery, sad-eyed face made him ideal for playing the over-the-hill detective Phil Fish in the 1970s TV series “Barney Miller” and the doomed Mafia soldier in “The Godfather.” Jan. 26.

Antonin Scalia, 79. Influential conservative and most provocative member of the Supreme Court. Feb. 13.

Nancy Reagan, 94. Backstage adviser and fierce protector of Ronald Reagan in his journey from actor to president — and finally during his battle with Alzheimer’s disease. March 6.

Phife Dawg, 45. Lyricist whose witty wordplay was a linchpin of the groundbreaking hip-hop group A Tribe Called Quest. March 22. Complications from diabetes.

Garry Shandling, 66. Actor and comedian who masterminded a brand of phony docudrama with “The Larry Sanders Show.” March 24.

Patty Duke, 69. As a teen, she won an Oscar for playing Helen Keller in “The Miracle Worker,” then maintained a long career while battling personal demons. March 29.

Merle Haggard, 79. Country giant who rose from poverty and prison to international fame through his songs about outlaws and underdogs. April 6.

Prince, 57. One of the most inventive and influential musicians of modern times with hits including “Little Red Corvette,” ”Let’s Go Crazy” and “When Doves Cry.” April 21.

Tommy Kono, 85. He took up weightlifting in an internment camp for Japanese-Americans and went on to win two Olympic gold medals for the United States. May 1.

Morley Safer, 84. Veteran “60 Minutes” correspondent who exposed a military atrocity in Vietnam that played an early role in changing Americans’ view of the war. May 19.

Rosalie Chris Lerman, 90. Survivor of the Auschwitz-Birkenau Nazi death camp who was a passionate advocate of Holocaust remembrance. May 19.

Gordie Howe, 88. Known as “Mr. Hockey,” the Canadian farm boy whose blend of talent and toughness made him the NHL’s quintessential star. June 10.

Anton Yelchin, 27. Rising actor best known for playing Chekov in the new “Star Trek” films. June 19. Hit by his car in his driveway.

Pat Summitt, 64. Winningest coach in Division I college basketball history who lifted the women’s game from obscurity to national prominence during her 38-year career at Tennessee. June 28.

Elie Wiesel, 87. Romanian-born Holocaust survivor whose classic “Night” launched his career as one of the world’s foremost witnesses and humanitarians. July 2.

Rev. Tim LaHaye, 90. Co-author of the “Left Behind” series, a literary juggernaut that brought end-times prophecy into mainstream bookstores. July 25.

Gene Wilder, 83. Frizzy-haired actor who brought his deft comedic touch to such unforgettable roles as the neurotic accountant in “The Producers.” Aug. 28.

Rose Mofford, 94. Arizona’s first female governor and a shepherd for the state during a period of political turbulence. Sept. 15.

Arnold Palmer, 87. Golfing great who brought a country-club sport to the masses with a hard-charging style, charisma and a commoner’s touch. Sept. 25.

Shimon Peres, 93. Former Israeli president and prime minister whose life story mirrored that of the Jewish state and who was celebrated as a Nobel prize-winning visionary who pushed his country toward peace. Sept. 28.

King Bhumibol Adulyadej, 88. World’s longest reigning monarch, he was revered in Thailand as a demigod, a humble father figure and an anchor of stability through decades of upheaval. Oct. 13.

Janet Reno, 78. First woman to serve as U.S. attorney general and the center of several political storms during the Clinton administration. Nov. 7.

Leonard Cohen, 82. Canadian singer-songwriter who blended spirituality and sexuality in songs like “Hallelujah,” ”Suzanne” and “Bird on a Wire.” Nov. 7.

Florence Henderson, 82. Broadway star who became one of America’s most beloved television moms in “The Brady Bunch.” Nov. 24.

Fidel Castro, 90. He led his bearded rebels to victorious revolution in 1959, embraced Soviet-style communism and challenged U.S. power during his half-century of rule in Cuba. Nov. 25.

Jayaram Jayalalithaa, 68. South Indian actress who turned to politics and became the highest elected official in the state of Tamil Nadu. Dec. 4.

John Glenn, 95. His 1962 flight as the first U.S. astronaut to orbit the Earth made him an all-American hero and propelled him to a long career in the U.S. Senate. Dec. 8.

Alan Thicke, 69. Versatile performer who gained his greatest renown as the beloved dad on the sitcom “Growing Pains.” Dec. 13.

Zsa Zsa Gabor, 99. Jet-setting Hungarian actress and socialite who helped invent a new kind of fame out of multiple marriages, conspicuous wealth and jaded wisdom about the glamorous life. Dec. 18.

George Michael, 53. Musician who shot to stardom at an early age in the teen duo WHAM! and moved smoothly into a solo career. Dec. 25.

Debbie Reynolds, 84. Actress who lit up the screen in “Singin’ in the Rain’ and other Hollywood classics, one day after losing her daughter, Carrie Fisher. Dec. 28.