Lock them up! The Clintons just ran into BIG trouble - The Horn News 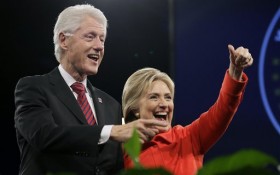 The Clinton family has spent decades dodging the law and avoiding prison for a laundry list of alleged crimes.

And it’s all because they keep a tight circle that refuses to turn against the powerful political family.

But now it looks like their luck is finally running out — and criminal indictments could be coming for Bill and Hillary Clinton very, very soon.

As John Solomon from The Hill recently reported, 6,000 pages of evidence were quietly filed with the Federal Bureau of Investigation and the Internal Revenue Service last year as part of a whistleblower submission.

The packet of evidence was compiled by a firm called MDA Analytics, which includes former federal criminal investigators. MDA officials have reportedly been in direct contact with both the FBI and IRS.

And MDA appears to have discovered some major bombshells that could spell big legal trouble for the Clintons.

Included in the evidence are internal Clinton Foundation reviews that raised serious concerns about compliance issues, commingling personal and charity business, and “pay to play” promises that may have been made to donors while Hillary Clinton was secretary of state.

Even more troubling is this nugget from Solomon’s reporting:

The submission also cites an interview its investigators conducted with Andrew Kessel that quotes the foundation’s longtime chief financial officer as saying he was unable to stop former President Clinton from ‘commingling’ personal business and charitable activities inside the foundation and that he ‘knows where all the bodies are buried.’

Aside from possible criminal charges, the Clintons may be looking at millions of dollars in delinquent taxes.

“When you have the organization’s own lawyers using words like ‘quid pro quo,’ ‘conflicts of interest’ and ‘whistleblower protections,’ you have enough to get permission to start interviewing and asking questions,” retired FBI supervisory agent Jeffrey Danik told Solomon.

Could this finally be the scandal that exposes the Clinton family crimes for good?

We’ll be watching the story closely. But, for now, it looks like the Clintons and their foundation are firmly on the federal government’s radar.