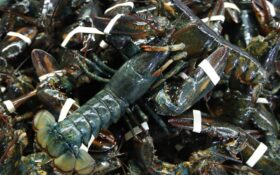 A Maine lobster fisher spoke in favor of President Donald Trump’s trade policies during the Republican National Convention on Tuesday, earning a rebuke from the state’s Democratic party, which faults Trump for hurting the industry.

Swan Island lobster harvester Jason Joyce said he was skeptical of Trump in 2016 and didn’t support him then, but has since come around because of the president’s trade deals. He referenced last week’s announcement that the European Union agreed to drop its 8% tariff on U.S. lobsters for the next five years. The EU has also agreed to work to make the move permanent.

“As long as Trump is president, fishing families like mine will have a voice,” Joyce said.

Maine Democrats said before Joyce’s speech on Tuesday that Trump has done more to hurt the lobster fishery than aid it. Trump’s trade hostilities with China have taken a valuable market away from the U.S. lobster industry, Maine Democratic Party Chair Kathleen Marra said.

“Trump’s failed trade war with China upended Maine’s vital lobster industry and turned hardworking lobstermen and women into collateral damage,” Marra said. “He promised us better trade deals, but instead he instead got played by China, and Maine workers got the bill.”

Maine is the center of the U.S. lobster industry, and the business is central to the state’s economy, tourism and culture. Lobster fishers have had several strong years at Maine’s docks. They have topped 100 million pounds (45,360,000 kilograms) of lobster for nine years in a row after never previously reaching that mark, according to state records that go back to 1880.

But the industry faces numerous challenges, including the impact of the coronavirus pandemic on the seafood business, the trade fight with China, a stubborn bait shortage and new protections designed to reduce risk to endangered whales.