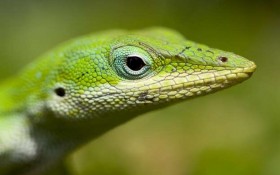 A central New Jersey elementary school science class has a new pet after a lizard was discovered in a student’s salad after being refrigerated for days.

The lizard had been cold and lifeless after being confined in a refrigerator for days. The lizard has since been warmed and lives in a cage in Eastburn’s class.

The tatsoi had been bought from Whole Earth Center in Princeton.

A store produce manager says greens are cleaned as they’re stocked and that the lizard must’ve been tucked away in a leaf.