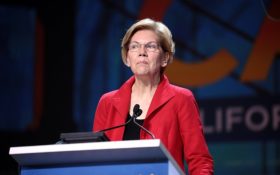 Sen. Elizabeth Warren, D-Mass., had a rough Wednesday at the Fifth Circuit Court of Appeals — and critics called her reaction to the court’s decision a “hissy fit.”

Warren has long championed the 2010 Dodd-Frank law that allowed the Consumer Financial Protection Bureau (CFPB) to be funded by the Federal Reserve, not Congress. It allowed the bureau to bypass funding through congressional appropriations.

Republican lawyers and the financial industry have fought that provision for years because it removes the bureau from congressional oversight.

A three-judge panel of the 5th U.S. Circuit Court of Appeals ruled that the design of the CFPB violated the Constitution because it receives funding through the Federal Reserve, rather than appropriations legislation passed by Congress. Democrats established the structure when they created the CFPB in the 2010 Dodd-Frank law as a way to shield the bureau from political pressures that could impact its oversight of the finance industry.

The judges also vacated a 2017 small-dollar lending rule targeted by the payday lending advocates who brought the case — the Community Financial Services Association of America and the Consumer Service Alliance of Texas.

“Congress’s decision to abdicate its appropriations power under the Constitution, i.e., to cede its power of the purse to the Bureau, violates the Constitution’s structural separation of powers,” the judges wrote.

The ruling left Warren deeply unhappy, and she took to social media to vent her frustrations.

The Fifth Circuit’s flawed logic also endangers the funding of numerous other bank regulators, including the Fed, OCC, and FDIC, which monitor our entire financial system.

By playing politics and rewriting law from the bench, these extremist judges would allow the big banks to pick Americans’ pockets and sow chaos throughout the economy. We can’t let them and their Wall Street cronies win.

On the other side of the political aisle, Warren’s rivals cheered the decision and said they have plans for the next steps.

The Fifth Circuit rules that the CFPB, created by Elizabeth Warren via the Dodd-Frank Act, is unconstitutional and must be brought under congressional appropriations. Fortunately, @FinancialCmte has a plan for that. pic.twitter.com/gumKXNNxd2

Congress should immediately take up my bill to bring the CFPB under the Appropriations Committee as it should have been in the first place.