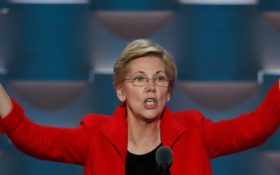 The life of Sen. Elizabeth Warren, D-Mass., plays out like a fantasy world.

From her phony American Indian heritage to her billion-dollar promises to the American people, critics say Warren doesn’t seem to live in reality.

Her campaign thus far has been nothing short of an outlandish movie script.

So it’s no surprise that she’s been linked to a highly controversial film — except this one wasn’t backed by liberal Hollywood elites.

It was financed by Iran.

A new report says Warren’s son-in-law, Sushil Tyagi, produced a film in 2008 on behalf of the extremist Iranian government. Tyagi and Warren reportedly have a very close relationship, and she would have known about the deal.

This is according to a new in-depth book by investigative journalist Peter Schweizer. Schweizer claimed that Warren’s son-in-law “has been involved in a series of curious — even troubling — business ventures around the world.”

The book, called Profiles in Corruption, claims that the movie The Song of Sparrows, directed by Iranian filmmaker Majid Majidi, was financed by Iran.

The movie was released in 2008 — a year of heightened tensions between the U.S. and Iran.

The full credits of the film, for some reason, seem to also have been scrubbed from the internet. We obtained a copy by using the Wayback machine and made a startling discovery: the movie’s chief investors included none other than the social deputy of the State Welfare Organization (SWO) of Iran (SWO-“معاونت اجتماعی سازمان بهزیستی کشور”) as well as the Cultural and Artistic Organization of Tehran. (“سازمان فرهنگی و هنری شهرداری تهران”)

These two investors in the film might appear at first glance to be innocuous cultural organizations—but they are not. Both are funded and controlled by the Islamist Iranian government.

The Cultural and Artistic Organization of Tehran states: “This organization was founded in 1996 and [does] its activities under the supervision of a board of trustees composed of various cultural institutions such as IRIB and Islamic propaganda organization.”

In summary, the two organizations behind this movie, particularly the Cultural and Artistic Organization of Tehran, are propaganda outlets.

According to Breitbart, the Cultural and Artistic Organization of Tehran celebrates Quds Day, which is a festival that encourages anti-American mobs who shout “death to America.”

An excerpt from Schweizer’s book also claims that there might have been recent efforts to erase the film’s existence on the internet.

Breitbart is claiming that the film was archived on a New York Times page, where Tyagi had been previously featured as a producer. But recently, the credits for his contributions have vanished.