No more living on the edge. CA cliff dwellers start to move - The Horn News 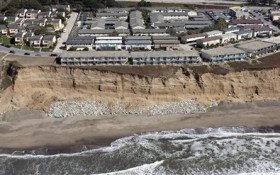 Sonja Thompson lives so close to the edge of an 80-foot bluff above the Pacific Ocean that when paragliders fly by “you can almost high-five them.”

Having the Pacific as your backyard has its benefits, and its dangers. Crumbling cliffs have forced dozens to leave their homes and others like Thompson may have to join them as EL Nino-fueled storms batter the coast.

Last summer, whale watching was at its prime and people who live on the crumbling cliffs of Pacifica were treated to more than 200 dolphin sightings. The moon and sun rises are spectacular, and the air feels like it’s a million miles away from smoggy cityscapes.

“All the nature and wildlife I read about in New York I get to see here up close and personal here,” said Druth McClure, who moved from the East Coast to a waterfront apartment here 20 years ago.

But some residents last month came home from work to find yellow “restricted use” tags on their front doors, which required them to start packing. 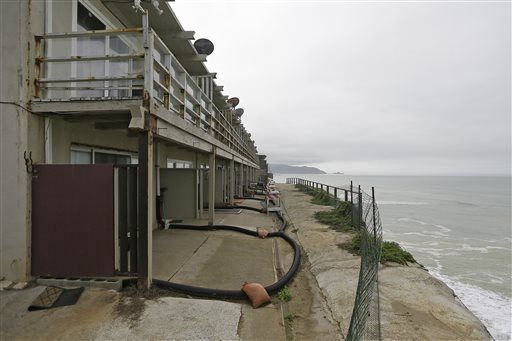 In this file photo from Monday, Jan. 25, 2016, an apartment complex stands on the edge of an eroding cliff. (AP Photo/Eric Risberg)

“At some point and time we won’t be able to live here. These cliffs are primarily packed sand so they will no doubt crumble away,” said Jackie James, who occasionally stays with her fiancé at an ocean-view apartment still safe to occupy. “What do they say about nature? It’s a relentless march.”

Pacifica, which means peaceful in Spanish, is anything but that when heavy rains and big surf batter this largely working class city of roughly 40,000, about 10 miles south of San Francisco.

The area is one of the two most erosion-prone stretches of the state’s coastline, along with the Monterey Bay area, according to Patrick Barnard, a coastal geologist for the U.S. Geological Survey.

Sediment from watersheds that historically sustained these beaches and served to protect the cliffs has been greatly reduced by human activity such as damming, flood control and dredging, Barnard said.

Sea level rise has exacerbated the problem, and its projected acceleration over the next century will expose the coast to more wave attack and erosion, he added.

The Pacifica cliffs have been crumbling for decades, as aerial photographs from the California Coastal Records Projects show.

The toll has been heavy in recent years. In 2010, two apartment buildings undermined by previous storms were evacuated and face demolition. Last month, during El Nino storms, residents of another apartment building and two homes were forced to move out. Continuing erosion has left the apartments sitting unsafely on the edge of an 80-foot bluff.

“We’re not fearful of falling off. They’ve been so diligent that they are going to tell us if we are in any imminent danger,” said Thompson, who lives in an oceanfront apartment with her wife, Karlie Thompson. The benefits of the beautiful spot, she said, outweigh the worry.

“The paragliders, they are so close you can almost high five them,” she said, adding there was one in a Santa suit over the holidays. 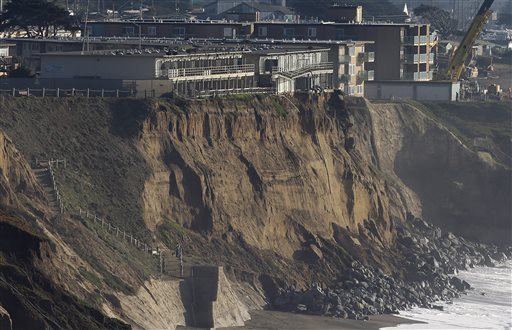 FILE – In this Jan. 27, 2016 file photo, boulders shore up an eroding cliff below an apartment complex that residents were forced to evacuate, at top left, in Pacifica, Calif.  (AP Photo/Jeff Chiu, file)

“Some of us tried squatting on the first night and almost got arrested,” said Gordon King, a 73-year-old disabled Vietnam vet and former merchant marine who lived in a cramped apartment with his wife Lana.

“We’ve been fighting time,” he said while packing their possessions.

The Red Cross gave them $250 but local hotels go for nearly $200 a night so they say they’ll likely rely on friends until they can find a new place to plant roots.

Jeff Bowman is in a similar situation.

“I have no job, nowhere to go,” he said. Now 55, he is unemployed after being laid off from a job at a supermarket.

“It should be my choice (to stay) rather than being told, ‘You gotta go,'” he said, standing not far from the cold pizza on the counter and crushed beer cans in the garbage.

Bowman was paying $1,200 a month for his subsidized apartment, far less than what places go for in San Francisco or other parts of Pacifica.

“I’m just going to get rid of the rest of this stuff, cash in these coins and figure out the rest of my life,” he said, pointing to a water jug filled with money.

Just four months before he was told to leave, Michael McHenry, 41, an addiction recovery coach, moved into his one-bedroom oceanfront apartment.

“I’m going to keep fighting,” he said. “I don’t couch surf nor will I let the city dump me in a homeless shelter to get me to go away.”

Standing outside his back door, he looked over the ocean then to the ground. “See the depression starting to form over there? That’s all going over very soon.”

He knew the apartment was someday going to be deemed unsafe, but figured he had more time.