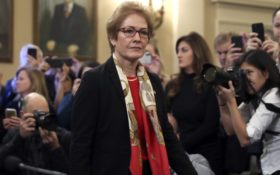 The House opened a second day of Democrat-led impeachment hearings Friday with a key witness: Marie Yovanovitch, the former U.S. ambassador to Ukraine who was fired by the president.

The public session was gaveled open before the House Intelligence Committee on Capitol Hill.

Rep. Adam Schiff, the Democratic chairman leading the impeachment efforts, praised Yovanovitch, saying she was “too tough on corruption for some, and her principled stance made her enemies.”

Yovanovitch, a career diplomat, is expected to relay her story of being told to “watch my back” and then being recalled by President Donald Trump.

You can watch the proceedings live here —

Yovanovitch and other officials now testifying publicly in the House hearings were handpicked by Democratic lawmakers. Schiff is hoping they provide accounts that make the case that the president’s behavior was impeachable.

Trump repeatedly assails the proceedings as a “hoax” and a “sham” and says he did nothing wrong.

In the phone conversation, Trump asked for a “favor,” according to an account provided by the White House.

Trump has urged voters to read the transcripts for themselves.

Just as the hearing was opening, the White House released the rough transcript of another call Trump had with Ukraine President Volodymyr Zelenskiy, an earlier April conversation that was largely congratulatory.

In the call Trump mentioned his experience with the Miss Universe pageant in Ukraine and invited Zelenskiy to the White House. He closed with, “See you very soon.”