Lindsey Graham shocks Republicans with this remark - The Horn News 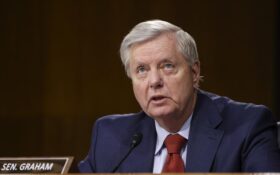 The world is watching in horror at Russia’s ongoing invasion of Ukraine, and the U.S. Congress is debating whether to respond with further targeted sanctions or more severe, blanket sanctions.

One senator, Republican Lindsey Graham of South Carolina, proposed an unconventional — and bloody — solution. He called for the Russians to kill their president, Vladimir Putin.

“The only way this s*** ends, my friend, is for somebody in Russia to take this guy out,” Graham told Hannity. “You would be doing your country a great service and the world a great service.”

Graham added, “Somebody in Russia has to step up to the plate. Is there a Brutus in Russia? Is there a more successful Colonel Stauffenberg in the Russian military?”

Graham repeated the remark on Twitter — at least, he repeated a clean version.

He also addressed the Russian people.

“The only people who can fix this are the Russian people. Easy to say, hard to do. Unless you want to live in darkness for the rest of your life, be isolated from the rest of the world in abject poverty, and live in darkness you need to step up to the plate,” Graham tweeted.

After this remark, Graham faced bipartisan backlash, including backlash from some Trump appointees.

The only people who can fix this are the Russian people.

Easy to say, hard to do.

I've seen more swift condemnation of Lindsey Graham's "assassinate Putin" Tweet by Republicans than anything else over the last 6 years.

His Tweet was wildly inappropriate but interesting that they finally found that this was where the line was for them.

Graham served with the Air Force in West Berlin during the 1980s. He voted for the Iraq Resolution in Congress, and then he defended his vote after the invasion. He currently sits on the Senate Budget Committee where he’s argued to increase defense spending.

In these respects, Graham has influenced U.S. foreign policy. Just Wednesday, Graham introduced a resolution “condemning the Russian Federation, President Vladimir Putin, the Russian Security Council, the Russian Armed Forces and Russian military commanders for committing flagrant acts of aggression and other atrocities rising to the level of crimes against humanity and war crimes against the people of Ukraine and others.”

Although influential, Graham has experienced popularity problems since the Trump administration, when he flip-flopped in his opinion of Trump and equivocated on his record of bipartisanship. He ran for re-election in 2020, and he underperformed Trump in his state. That was a rarity for Republicans in 2020.