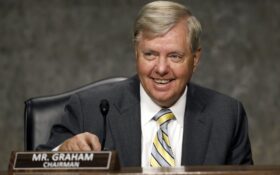 During an interview on Fox News, Graham teased that more information on potential misconduct in the two-year-long Russia probe was set to be released in less than two weeks — a reveal which will likely hurt Biden and those from former Presidnet Barack Obama’s campaign.

A report found that up to 25 people connected to the Trump investigation improperly wiped their cell phones before the Mueller report was made public.

“We cannot live in a country where this is tolerated. Trump-Russia, look how much money they spent, how many agents were involved in investigating all things Trump and Russia, how many subpoenas issued, how many lives turned upside down,” Graham said.

He later told Hannity, Tthe question is, did they obstruct justice? Did they intentionally delete information from their phone because [Inspector General Michael] Horowitz was on the case?”

Graham said U.S. Attorney John Durham would get to the bottom of it — but he has his own work to do.

“My job, as chairman of the Senate Judiciary Committee, is to find out how the Department of Justice and the FBI got Crossfire Hurricane so wrong, why they lied to the FISA court — to make sure it never happens again,” he said.

He hinted that another layer had been uncovered by his Senate Judiciary Committee and was going to be released shortly.

“You think you are mad about the phones being wiped?” Graham asked rhetorically. “Stay tuned. We’ll talk in about 10 or 12 days and we’ll see if there is something else you can get mad about.”

Republican lawmakers have been increasingly frustrated by the information surrounding the Muller investigation into Russia meddling in the 2016 election. Russian propaganda generally favored Trump’s candidacy, but Mueller concluded there was zero evidence of collusion by anyone on the Trump campaign.

Durham is investigating the origin of the wiretap placed on Trump campaign aide Carter Page based on falsified statements and misinformation by FBI agents who disliked Trump.