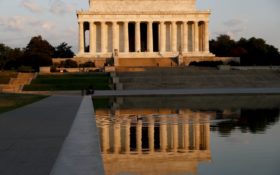 The National Park Service says someone used red spray paint to scrawl an anti-law message on the Lincoln Memorial in Washington.

The Park Service says the vandalism took place early Tuesday morning. A photo released by the service shows an expletive followed by the word “law” scrawled on the inside of one of the memorial’s columns.

Workers are using a “gel-type architectural pain stripper safe for use on historic stone” to remove the graffiti. They say treatments will be applied until all evidence of the paint is gone.

The U.S. Park Police is urging anyone with information on the vandalism to contact them.