Libyan terrorist gets 22 years for Benghazi attacks - The Horn News 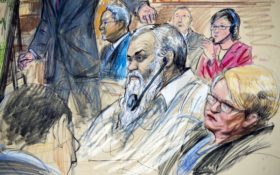 A Libyan militant was sentenced Wednesday to 22 years in prison for his role in the 2012 attacks on U.S. compounds in Benghazi, Libya, that killed four Americans, including Ambassador Chris Stevens.

In November 2017, a jury in Washington convicted 47-year-old Ahmed Abu Khattala of multiple terrorism-related charges but found him not guilty of murder. The convictions could have carried a maximum sentence of life in prison.

Prosecutors accused Abu Khattala of heading an extremist militia and directing the attacks that killed Stevens and three others. But prosecutors also acknowledged that they lacked evidence of Abu Khattala actually firing any weapons.

The Benghazi attacks and their aftermath quickly became a divisive political issue in American politics. Republicans accused then-President Barack Obama and then-Secretary of State Hillary Clinton of intentionally misleading the public and stonewalling congressional investigators. The final report by a Republican-led congressional panel faulted the Obama administration for security deficiencies at the Libyan outpost and a slow response to the attacks.

Those allegations continued to follow Clinton during her failed 2016 presidential campaign.

The government’s case against Abu Khattala relied heavily on the testimony of informants, including one who was paid $7 million to befriend Abu Khattala, help the government gather information on him and arrange his June 2014 capture. Prosecutors used surveillance video to show Abu Khattala delivering some of the attackers to the scene and cellphone records to show he was in contact with some of the attackers during and afterward.

Defense attorneys argued that the evidence was inconclusive and that Abu Khattala was being singled out simply because of his ultra-conservative Muslim beliefs.

Jurors convicted Abu Khattala on four counts, including providing material support for terrorism and destroying property and placing lives in jeopardy at the U.S. compound, but acquitted him on 14 others, included murder.

U.S. Judge Christopher Cooper, in announcing the sentence, addressed Abu Khattala directly as the white-bearded defendant impassively listened to the translation on headphones.

“I don’t know if you were the main planner of the attack or … whether you even intended to kill anyone that night,” Cooper said. “I simply do not believe that you were an innocent bystander on the night of September 11, 2012.”

Cooper, in his presentencing statement, acknowledged the political complexities that surround the case.