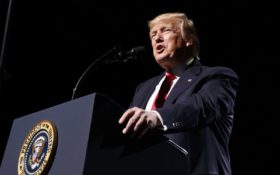 The NAACP is urging people to wear white and hold anti-Trump signs on Monday. Another group says demonstrators will “take a knee” before the big game to protest President Donald Trump’s visit to Atlanta.

Atlanta police say they worked with the Secret Service on preparations for months before the College Football Championship game between Alabama and Georgia.

The NAACP said Sunday that wearing white is meant to mock the “snowflake” label Trump’s supporters use to describe their opponents.

Another group, Refuse Fascism ATL, says that before kickoff, they’ll “take a knee against Trump” outside CNN’s world headquarters, in solidarity with athletes who have knelt during the national anthem to protest racial injustice.