Liberals loved this anti-Trump video, but there's ONE problem - The Horn News 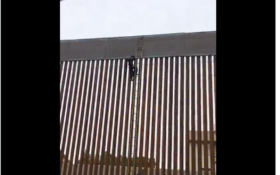 The liberals’ latest effort to poke fun at President Donald Trump went like any other — they failed and they hid the facts.

This is the newly replaced wall along the US/MEXICO border. #TheWall pic.twitter.com/MIrD3HhVsE

There was just one problem.

The video accidentally showed the wall working exactly as intended — and the U.S. Border Patrol is proud of their efforts.

Rep. Sam Graves, R-M.O., re-shared the video on Twitter and explained that there was more than meets the eye being shown.

“Yesterday, a video showing someone illegally crossing into the United States over the new border wall went viral,” he wrote. “Today, the Border Patrol revealed there was more to the story.”

“Spoiler alert: the suspect didn’t get away – and the wall worked as planned.”

The updated video provided by Graves shows a border patrol agent explain how it all really went down.

The agent says that the new border wall technology was designed to slow down and hinder illegal immigrants so that Border Patrol can respond — and the illegal alien in the video was indeed captured.

“That subject turned out to be a 16-year-old Mexican male. All too often, criminal organizations exploit juveniles in this regard,” the agent said. “Through partnerships with the government of Mexico, coordination is currently underway to locate the other two subjects involved in this incident.”

You can watch the real video below:

Yesterday, a video showing someone illegally crossing into the United States over the new border wall went viral.

Today the Border Patrol revealed there was more to the story.