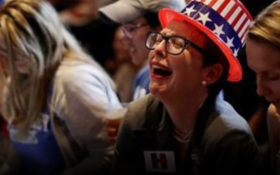 The reaction to Kavanaugh has been, in a word, revolting. The pro-abortion people wailed, the Trump haters screamed. The dark left has already begun its attack campaign.

In Washington, D.C., an angry mob threatened a Fox News reporter and chased her away.

Shannon Bream of Fox News describing how they had to cancel their live broadcast because of the "volatile" protesters: "We did have a plan to have our show out their live, it got so volatile at points that we ultimately didn't feel it would be safe" #SCOTUS #BrettKavanaugh pic.twitter.com/UthgjaNFSi

That violent reaction was just the beginning.

Liberals are predicting the very collapse of the American republic. Yes, really… and the fear mongering started at the very top.

The nomination of Judge Brett Kavanaugh will threaten the lives of millions of Americans for decades to come and will morph our Supreme Court into a political arm of the right-wing Republican Party.

Liberals are predicting an “end to the Republic”–

I'm not gonna lie: Kavanaugh, like most of Trump's picks for almost everything, is an abomination. The consequences here could quite literally end the republic as we know it.

However, this does not mean all hope is lost. By a long shot.

A constitutional-minded justice, hysterical liberals claim, will somehow outlaw the right to vote –

By nominating a defender of the constitution, the Left is saying Trump is somehow completing an evil plan to become dictator —

This is the moment of decision. If Kavanaugh gets confirmed as SCOTUS, he'll protect Trump from any scrutiny of his criminal actions, and Trump can turn the U.S. into a dictatorship. What action in the real world are you taking today to save democracy in the U.S. and beyond?

So what’s the truth? Liberal legal scholars are applauding the nomination. “The nomination of Judge Brett Kavanaugh to be the next Supreme Court justice is President Trump’s finest hour, his classiest move,” wrote Yale law school professor Akhil Reed Amar, an outspoken supporter of former Secretary of State Hillary Clinton, in The New York Times.

That sounds awful different from the political theater happening in D.C.

Kavanaugh, 53, is a former law clerk for retiring Justice Anthony Kennedy. Like Trump’s first nominee last year, Justice Neil Gorsuch, Kavanaugh would be a young addition who could help rebalance the court on the side of conservatives.

“He is a brilliant jurist, with a clear and effective writing style, universally regarded as one of the finest and sharpest legal minds of our time,” Trump said in his prime-time televised White House announcement Monday. He added: “There is no one in America more qualified for this position, and no one more deserving.”

With Kavanaugh, Trump is replacing a swing vote on the nine-member court with a staunch conservative. Kavanaugh, who serves on the Court of Appeals for the D.C. Circuit, is expected to be less receptive to abortion and gay rights than Kennedy was. He also has taken an expansive view of executive power and has favored limits on investigating the president.

On Monday, Trump phoned retiring Justice Kennedy to inform him that his former law clerk would be nominated to fill his seat. Trump signed Kavanaugh’s nomination papers Monday evening in the White House residence.

Some conservatives have expressed concerns about Kavanaugh, questioning his commitment to social issues like abortion and noting his time serving under President George W. Bush as evidence he is a more establishment choice. But his supporters have cited his experience and wide range of legal opinions.

Kavanaugh is likely to be more conservative than Justice Kennedy on a range of social issues. At the top of that list is abortion. A more conservative majority could be more willing to uphold state restrictions on abortion, if not overturn the 45-year-old landmark Roe v. Wade decision that established a woman’s constitutional right.

Kennedy’s replacement also could be more willing to allow states to carry out executions and could support undoing earlier court holdings in the areas of affirmative action in housing and the workplace. Kennedy provided a decisive vote in 2015 on an important fair housing case.

Like the other eight justices on the court, Kavanaugh has an Ivy League law degree, spending his undergraduate and law school years at Yale. Since 2006, he has been a judge on the federal appeals court in Washington. He also was a key aide to Kenneth Starr during Starr’s investigation of President Bill Clinton, worked on behalf of George W. Bush’s campaign during the election recount in 2000 and served in the Bush White House.

Kavanaugh’s many written opinions provide insight into his thinking and also will be fodder for Senate Democrats who will seek to block his confirmation. He has written roughly 300 opinions as a judge, authored several law journal articles, regularly taught law school classes and spoken frequently in public.

Trump’s success in confirming conservative judges, as well as a Supreme Court justice, has cheered conservatives.

Of the court’s liberal justices, Ruth Bader Ginsburg is 85 and Stephen Breyer turns 80 next month, so Trump may well get another opportunity to cement conservative dominance of the court for years to come.