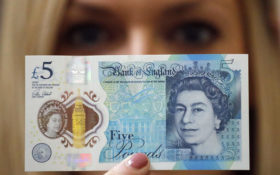 Just when you thought liberals couldn’t get any more sensitive, now they are refusing to touch money because it offends them!

The Bank of England’s new plastic 5-pound note is stronger, cleaner and safer — but apparently not acceptable for vegetarians.

Vegans and vegetarians are calling for the new bank notes, which have only been in circulation for two months, to be replaced because they are made with a minuscule amount of a substance derived from animal fat.

The Bank of England confirmed on Twitter that the notes contain “a trace of a substance known as tallow” — a rendered form of animal fat, processed from suet, which is sometimes used in soaps and candles.

Independent reported, “Innovia, the company that makes the banknotes said it obtained the animal fat through a supplier, which it declined to name. The company said it used the substance to give the notes their anti-static and anti-slip properties, and pointed out that thousands of products contain tallow. It could not confirm which animals the fat had come from.”

An online petition against the notes has been getting attention Wednesday. The petition says the use of tallow is “unacceptable to millions of vegans, vegetarians, Hindus, Sikhs, Jains and others in the U.K.”

The petition has gathered over 100,000 signatures to stop the circulation of the note. But just how many cows are these liberals saving by boycotting the note?

Vice did the math, and came up with the conclusion that each 5 pound note contains roughly 0.00007 g of tallow. Multiplying that by the total number of 5 pound notes in circulation, 329 million, you get 23 kg of tallow used in total to make the bills. Considering that the average cow contains 40 kg of tallow worthy fat, this uproar is all over about half of one cow!

You think these liberals would find a better use of their time.

The Bank of Canada says their bank notes also have tallow, according to a CBC report.

So get ready for the ridiculous uproar in Canada next, where liberals will be chanting, “Save half of that cow!”