Liberals go BERSERK over this Olympian’s photo - The Horn News 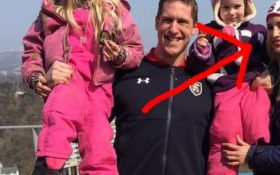 When this U.S. Olympian shared of photo of himself and his daughters celebrating after the close of the 2018 Winter Olympics, no one expected the nasty response by liberals.

That’s because Olympian Nate Weber, who is a Sergeant First Class in the Green Berets, was seen celebrating with First Daughter Ivanka Trump.

On social media, leftists exploded in rage over Weber’s patriotism — and Weber was forced to defend himself.

Regardless of your politics you have to admit that it's pretty cool when @IvankaTrump invites your kids to watch the #Olympics with her. It was an amazing experience for them. #teamusa https://t.co/4zKzMZh8JQ

The nasty attacks on Weber and his family continued, so the Green Beret doubled-down and did what our Special Forces do best.

He went on the offensive, sharing a hashtag #MAGA for, “Make America Great Again.”

Here's another tweet for everyone that didn't like @IvankaTrump being absolutely wonderful to my children. Her and my daughters were like best friends today. It was a truly special experience for them. #thankyou pic.twitter.com/u6hlVUJonz