Liberals FURIOUS over this Trump promise - The Horn News 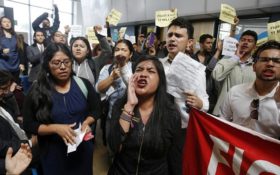 Between the time President Donald Trump was sworn into office and this May, more than half-a-million people have gotten off one welfare program (WIC) alone – and a loads of them are illegal immigrants afraid Trump will deport them.

Trump promised to get the government off Americans’ backs, and stop illegals from being a burden to American citizens – and he’s delivering.

Enrollment in the WIC program (which is technically called the “Special Supplemental Nutrition Program for Women, Infants, and Children”) is down by 600,000 – largely due to immigrants getting off welfare.

Illegal immigrants aren’t eligible for welfare benefits in the U.S. – but they skirt the law and cash in, anyway.

“WIC has been largely immigration-blind since it was created in 1974,” Politico reports.

But since Trump’s inauguration, something wonderful has happened.

WIC officials in at least 18 states say enrollment is down by 20%, and they chalk that up to Trump’s no-nonsense immigration policy.

Liberal politicians played fast-and-loose with the law for decades. It worked like this:

Technically, the money goes to the anchor baby, who is considered a legal citizen – but the money is spent by its illegal alien parents.

U.S. taxpayers ended up with smaller paychecks to pay for the welfare of illegals who gamed the system – and the salaries of the liberal politicians who let them get away with it.

Trump is sick of it – and believes this shows no “fairness to the American workers and taxpayers,” a DHS official told Politico last week.

Trump got elected to stop winking at lawbreaking, seal the border, and put American citizens first.

The president’s efforts to make “our immigration processes comport with law” is “widely supported by the vast majority of the American electorate,” the official added.

Last June, Trump promised a rally in Iowa that he would roll out “new immigration rules” saying that “those seeking immigration into our country must be able to support themselves financially and should not use welfare for a period of at least five years.”

These aren’t new rules, but Democrats – and some open borders Republicans – have ignored them for decades.

Even legal immigrants are banned from being on welfare for 5 years, under the welfare reform law that former President Bill Clinton signed when he was running for re-election in 1996.

But Obama – and former President George W. Bush – gutted some portions of the law… and the bills started to mount.

But the costs of illegal alien welfare stretched from Detroit down to Houston, and New York to L.A.

“At the federal, state, and local levels, taxpayers shell out approximately $134.9 billion to cover the costs incurred by the presence of more than 12.5 million illegal aliens, and about 4.2 million citizen children of illegal aliens,” according to a report from the Federation for American Immigration Reform. “That amounts to a tax burden of approximately $8,075 per illegal alien family member.”

That’s roughly $24,000 a year for each family of illegal aliens, according to Robert Rector of the Heritage Foundation.

“This is a disturbing and unsustainable trend,” FAIR said.

Since “households headed by aliens are much more likely than those headed by citizens to use federal ­means-tested public benefits,” the U.S. government will “deny admission to any alien who is likely to become a public charge.”

Beltway politicians in both parties limited this to cash benefits – but Trump points out that food stamps, Head Start, WIC, and Medicaid cost taxpayers money, too.

Add up all the money that the already-squeezed middle class pays for illegal aliens’ welfare, and it’s more than enough to pay for Trump’s $18 billion wall on the Mexican border.

“The wall could pay for itself even if it only modestly reduced illegal crossings and drug smuggling,” said immigration expert Steven A. Camarota of the Center for Immigration Studies.

Obama so degraded the country that illegals had no fear of breaking the law to come into the country – and demanding that the country pay all their bills.

Trump kept two campaign promises at once: He cut welfare spending and got illegals out of taxpayers’ wallets.

He’s single-handedly proven that getting tough with lawbreakers and welfare cheats works – and every American is richer for it.