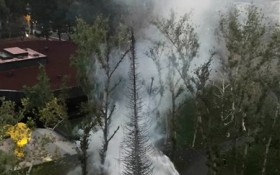 Even though Christmas is done, the Christian-hating left can’t help themselves. Liberals are attacking yet another holiday staple enjoyed by millions.

This time, they claim that “Jingle Bells” is rooted in a RACIST past, turning a joyful winter song into a dark reminder of an ugly chapter in American history.

And it’s all thanks to a report from a lecturer at Boston University.

Kyna Hamill, a theater historian is trying to dash all the fun out of the song with her report that claims its roots are steeped in the racist minstrel shows in the mid-19th century.

“Its origins emerged from the economic needs of a perpetually unsuccessful man, the racial politics of antebellum Boston, the city’s climate, and the inter-theatrical repertoire of commercial blackface performers moving between Boston and New York,” Hamill wrote in a new paper cited by Fox News.

The song, originally titled “One Horse Open Sleigh,” has what she called a “problematic” background that’s revealed after a careful reading… or maybe over-reading… of some of the lyrics.

She said words such as  “thro,” “tho’t,” and “upsot” were words sung in a “racialized” way in blackface.

It would sound like something a black person in the south would sing to an audience of northerners in Massachusetts, which is where the song was written and first performed… in blackface… according to Hamill.

However, that part of the song’s history has been covered up, she claims.

A deep sea creature that can live forever? [sponsored]

“The legacy of ‘Jingle Bells’ is one where its blackface and racist origins have been subtly and systematically removed from its history,” she wrote.

Apparently, she’s taking it upon herself to correct the record.

“Although ‘One Horse Open Sleigh,’ for most of its singers and listeners, may have eluded its racialized past and taken its place in the seemingly unproblematic romanticization of a normal ‘white’ Christmas, attention to the circumstances of its performance history enables reflection on its problematic role in the construction of blackness and whiteness in the United States,” she wrote.

And naturally, the easily offended knee-jerk PC leftists are using her report to try to take the jingle out of the bells.

They can’t seem to enjoy anything without injecting some degree of anguish, guilt or self-loathing into it!

Now, Hamill is telling the CBC that she’s getting hate mail over her paper and that she never claimed the song itself is racist.

However, she also stands by her analysis.

“Everything I said is true. I haven’t really done anything wrong,” she told the Canadian news agency. “If people don’t want to be comfortable with the truth, then that’s not really my problem.”

Maybe the truth is that here in the 21st century, it’s a fun little Christmas song that people enjoy.