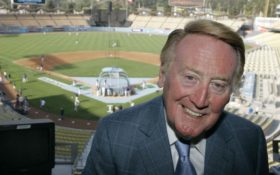 So the left responded in the only way they know how — they attacked Scully for being nothing but an “old white man.”

Scully, beloved and respected icon whose reputation extends across all professional sports, said during “An Evening with Vin Scully” at the Padadena Civic Auditorium in California that he was done with the NFL.

“I am so disappointed. And I used to love, during the fall and winter, to watch the NFL on Sunday. It’s not that I’m some great patriot. I was in the Navy for a year. Didn’t go anywhere, didn’t do anything,” Scully said.

“But I have overwhelming respect and admiration for anyone who puts on a uniform and goes to war. So the only thing I can do in my little way is not to preach. I will never watch another NFL game,” Scully concluded to cheers from the audience.

To liberals, that’s unacceptable — and they quickly snapped back.

NBC Sports Ashley Varela responded, “While it would be easy to write this off as another old white guy out of touch with the social and political problems of today’s society, that only trivializes an important issue. If any positive change is going to stem from these silent protests, it will require those in positions of power and influence to become allies, not adversaries.”

“A member of the National Baseball Hall of Fame, Mr. Scully retired last year after 67 seasons calling games for the Los Angeles Dodgers but had also done play-by-play announcing for NFL games for CBS from 1975 to 1982,” The Washington Times reported.

How did Deadspin talk about such a legendary sports announcer’s opinion on patriotism and the NFL?

“Old Retired White Man Has Opinion You’d Expect On National Anthem Demonstrations,” they wrote, saying it was “unclear” why Scully brought up the military at all. Clearly, they don’t get it.

Of course, Scully was notable for being close friends with former L.A. Dodger Jackie Robinson, who was famous for breaking baseball’s color barrier.

Vin Scully — not Colin Kaepernick — is the kind of American our country needs more of.

Liberals would be well off to listen to men like him, instead of trying to scream them down.