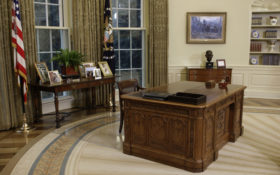 The newest member of the Trump family had the pleasure of sitting in the president’s seat in the Oval Office — and it left liberals screaming mad.

Still a baby, Luke Trump got a taste of the president’s legacy — and his father Eric Trump shared the adorable picture to Twitter.

Liberal activists took the opportunity to use the innocent little baby as a way to slam his grandfather President Donald Trump… how disturbing.

Who would hate love this photo? Snowflakes, that’s who.

Twitter users were not happy with the tiny tot lounging in the Oval Office, and they were sure to rip the baby to shreds.

When he grows up you can remind him that this is where his grandfather used to sit…before he was impeached and removed from office. ????

He would actually be an improvement over the person who regularly occupies that chair.

And the most horrendous response of all goes to Jim.

Do Little Luke favor and tell him his Grandpa died in Vietnam.. though we all know that would be impossible thanks to supposed bone spurs and a quack doctor.

Liberals will take any excuse they can get to insult and disrespect the first family. Even is that means going after a newborn baby.

It seems as though they are forgetting that past presidents have also welcomed children into the Oval Office — and there was no uproar when these photos hit the media.

Here’s a photo of President Barack Obama playing with a random child in the Oval Office.

And here’s a photo of John John Kennedy sitting in his daddy John F. Kennedy’s chair in the Oval Office.

Isn’t it funny how no one freaked out over these photos?

Apparently showing humanity in the White House is off limits to snowflakes.

They should appreciate an opportunity to set politics aside and just enjoy the overwhelming cuteness of Little Luke.