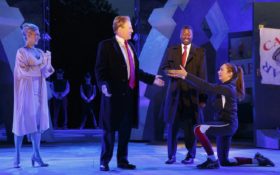 Earlier this year, the Public Theater in New York City proudly boasted about their corporate partners backing their “Trumpified” version of William Shakespeare’s “Julius Caeser” — a play that depicts the ruthless assassination of the Roman leader.

Now that their sponsors have seen the tasteless play, they’ve started pulling their money out — and it has liberals furious.

Bank of America is the latest company to have problems with the Manhattan-based theater company’s portrayal of Julius Caesar as a Donald Trump look-alike in a business suit who gets knifed to death.

The Charlotte, North Carolina-based company tweeted a statement Sunday night saying it’s withdrawing its funding for the Public Theater’s production of “Julius Caesar.” It said the theater “chose to present Julius Caesar in such a way that was intended to provoke and offend.”

Earlier, Atlanta-based Delta Air Lines said it was pulling its sponsorship, saying “it crossed the line on the standards of good taste.”

The play is part of the city’s free Shakespeare in the Park festival in Central Park. Its director, Oskar Eustis, says even though he showed Trump being brutally stabbed to death by a gang of assassins, the production “in no way advocates violence toward anyone.”

Performances of the assassination scene began just days before comedian Kathy Griffin was criticized for posing for a photograph in which she gripped a bloodied rendering of Trump’s head.

Insider Edition covered the controversy, and included footage of the assassination which you can see below —