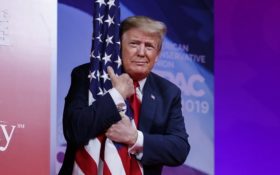 Over the weekend liberal protestors across America had a plan to demonstrate in response to the nationwide ICE enforcement operation on illegal immigrants, ordered by President Donald Trump.

In cities all across the U.S., far-left activists marched and shouted a message that was loud and clear: they’ll stand up for illegal immigrants even if it means disgracing themselves and America.

So one protest group in particular, in Aurora, Co., went to drastic measures to prove it — by bombarding a private ICE detention center and ripping down the American flag.

But that wasn’t enough.

In its place, they decided to fly the Mexican flag. Protestors screamed and shouted as the flag was being raised. They sounded bloodthirsty to disrespect their own country — they couldn’t wait for the flag of another nation to fly high.

You can watch the cringeworthy video below:

Protestors on @ICEgov property just pulled down the American flag and replaced it with the Mexican flag. The group by the doors is growing. Though most protestors are still on the street. pic.twitter.com/X2waaFMEOW

Keep in mind that this is taking place in Colorado — a state that’s not even on the southern border — yet liberals want to treat their own country like garbage to allow illegal immigrants to live here.

This liberal madness is proof that the far-left has gone completely unhinged, perhaps to the point of no return.

Because what’s lost in all of this protesting, is the point — what’s the real agenda of flying the Mexican flag? It seems that the point of liberals is to abuse America rather than stand up for the rights of illegal immigrants.

See the video below for further proof:

One person went past the barrier at the ICE detention center in Aurora , and then a bunch more followed. Huge crowd gathered outside on the street chanting “close the camps”#9news pic.twitter.com/TwSBZM7nid

These so-called sympathizers for illegal immigrants are nothing more than pretenders.

The protests have become a way for radical liberals to score cool points on social media for bashing America and President Donald Trump’s administration.

It’s an act that’s been getting old for some time. But now it’s getting dangerous, and disgusting.

Claudia Castillo, a 22-year military intelligence major in the U.S. Army, said she pleaded with the group of about 25 that pulling down the flag wasn’t part of the plan.

She said that rather than pull back, members of the group spit on her, shoved her, and cursed at her.

“It was disgusting and shameful,” Castillo told the Post. “They have compromised our movement, and they stole the spotlight and endangered our undocumented people.”

Police say they will be reviewing any available video to help them identify protesters who trespassed and pulled down the American flag.

In a statement on Facebook , Aurora Police Chief Nick Metz said police decided not to intervene when the flags were being removed to protect the safety of the majority of protesters who were acting peacefully as well as that of officers but they would have acted had there been violence or damage to the property.