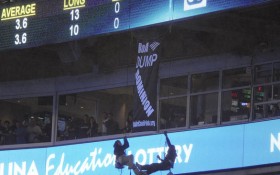 Two liberal protesters rappelled down from the upper balcony to unfurl a banner during the Monday Night Football game between the Indianapolis Colts and the Carolina Panthers in Charlotte, NC, yesterday.

Their target? A gas export facility in Maryland, a nearly 6.5 hour drive from the stadium.

Two protesters began dangling over fans in the lower bowl and in front of press-box windows late in the third quarter, then displayed a banner telling Bank of America to “dump Dominion.”

The protesters hung from the ropes well into the fourth quarter before being finally arrested.