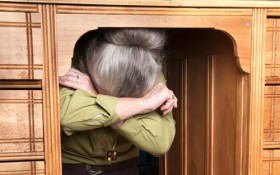 Prof. Heidi Czerwiec, an associate professor of English at the University of North Dakota (UND), claims she is so enraged that ROTC cadets are practicing maneuvers at the university, that she plans to call the police every time she sees them.

According to a complaint letter she wrote to the Grand Folks Herald, when Czerwiec first saw “two figures in camo” outside her office, she threw herself under her desk and desperately called 911 until they verified to her “that yes, in fact, I’ve probably just seen ROTC cadets.”

According to multiple students, these recent ROTC maneuvers had been announced in a campus-wide email to all current students and faculty and included information on when, where and why they would be conducted.

Despite knowing in advance what was happening, Czerwiec claimed she was so fearful when she spotted two of the students in their camouflage uniforms that she could barely speak.

“Apparently, it’s not enough that UND’s administration is attacking the quality of education by cutting programs and experienced faculty and jacking class sizes. Now, we must also feel under physical attack as well,” she wrote.

Czerwiec claimed that a university safety officer scolded her for calling emergency personnel for help after she knew for weeks what would happen, and that it further upset her to learn that ROTC cadets “will be doing these exercises for the next couple weeks.”

“So I reply that I guess I’ll be calling 911 for the next couple weeks — and I will. Every time,” Czerwiec promised.

Czerwiec, whose most recent work include “a sonnet sequence that negotiates the relationship between formal poetics, bondage/discipline, and female identity through the figure of elusive 1950s pinup Bettie Page,” apparently finds the presence of ROTC cadets unacceptable.

“It’s already highly inappropriate to conduct unnecessary military maneuvers in the middle of the quad,” she wrote. “But with school shootings on the increase and tensions at UND running high, it’s especially irresponsible. We’re already under financial and emotional attack. We don’t need to feel under physical attack, too.”