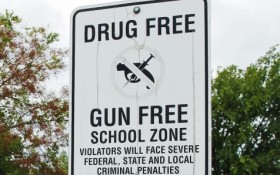 Just one day after a lone shooter went on a rampage at Umpqua Community College in Roseburg, OR, details are emerging about a fateful decision the college made within the last year.

The gunman, widely reported as Chris Harper Mercer, killed nine people and wounded ten at the Western Oregon college yesterday before dying after a shootout with police.

Mercer was reportedly able to move around classrooms and buildings targeting victims, leading some to wonder why nobody was able to stop him.

Joe Olson, who retired as president of UCC just three months ago, told the Associated Press that there was a major debate just last year about whether the school should hire armed security guards.

But the proposal was ultimately scrapped for fear it would affect the ‘campus culture’. There was just one unarmed security worker on campus when Mercer began to shoot.

While President Obama and liberals in Congress sought to politicize the shooting and argue for gun control, a lack of guns on campus may have been a contributing factor to the tragedy.

Some media outlets have reported that UCC was not technically a “gun-free zone” where students and staff are not allowed to carry firearms. But they’re not telling the whole truth. While the UCC website has mostly been down since the shooting, an archived version of its student safety handbook reads:

Possession, use, or threatened use of firearms (including but not limited to BB guns, air guns, water pistols, and paint guns) ammunition, explosives, dangerous chemicals, or any other objects as weapons on college property, except as expressly authorized by law or college regulations, is prohibited.

There’s been a major left-wing push over the past several years to encourage colleges to draft regulations forbidding guns on campuses.

They are regulations that students are expected to follow – but not criminals.